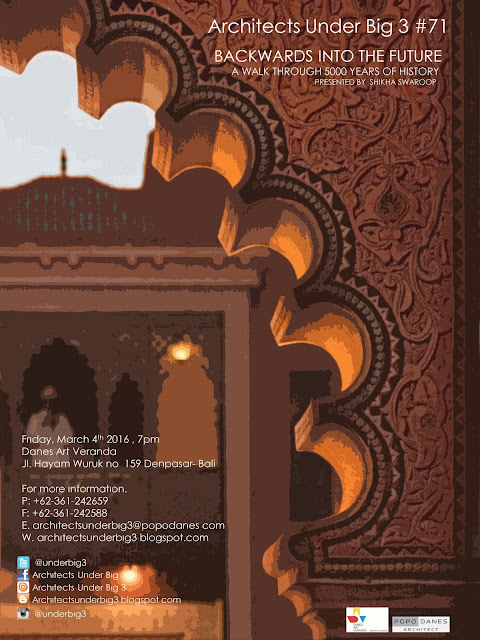 Architects Under Big 3 #71 Shikha Swaroop
“BACKWARDS INTO THE FUTURE: A WALK THROUGH 5000 YEARS OF HISTORY”

Our cultural and natural heritage is irreplaceable sources of both, life and inspiration. They are our touchstones, our point of reference, and our identity.

My interest in history peaked at an early age, while still at school. It was, however, during my under-graduate degree in architecture that I truly began to appreciate the true essence of culture and heritage. Having studied The History of Architecture for over 6 semesters, my mind was captivated by the rich architectural heritage, not just of India, but worldwide.

Being a “big-city-girl,” I started losing touch of my country’s rich past. After spending time travelling extensively throughout India, I was enchanted by the vividness, from the grandeur of Islamic architecture, to the spirituality of the temples to the humble houses of common man. Every brick had a story to tell, if only one listens.

One of my most insightful experiences was having worked with INTACH (Indian National Trust for Art and Cultural Heritage) on a conservation project of one of the British colonial areas. Indian history, as beautiful as it may be, was marred with wars and foreign invasions. However, the study of the architecture of the respective period has enlightened me into a more progressive way of thinking.

Now allow me to take you on a grand tour of India. Let’s walk backwards, through over 5000years of history.

Shikha was born on October 24th, 1992 in Orissa, India. She is still undergoing her under-graduate architectural training in B.M.S. School of Architecture, Bangalore from 2011-2016. Currently interning at Popo Danes Architect, Bali, she is working on publishing a book for Popo Danes. In addition to this, she has undergone training with INTACH (Indian National Trust for Art and Cultural Heritage) on architectural conservation and documentation (2013).