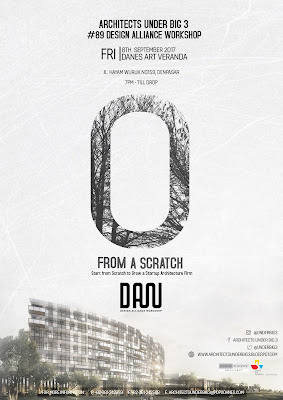 Architects Under Big 3 #89 Patriot Negri / Design Alliance Workshop
“0: Start from Scratch to Grow a Startup Architecture Firm”
start from scratch : “to start from the very beginning; to start from nothing”.

A story regarding on how a startup architecture firm was formed initially with 0 (zero) Rupiah and today  already successfully experience handling the small scale project such as house to the big scale project  like mixed-use building. DAW (Design Alliance Workshop) was formed in the mid 2016 as the initiative from Andi Anggoro or nicknamed Andi, anITB architecture graduate who came back to Jakarta after worked for 8 years in DP Architects, Singapore. In the beginning, he was looked for any potential associates to collaborate on some personal project commision on him. The answer come with Patriot Negri or nicknamed Egi, an Architect who taken his undergraduate studies in 2009 and master studies in 2013.  On june 2016, they was worked in a homestay project that located in Lebak Bulus area.  In additon at that time, Egi also had graduated from his master studies and actively engaged as a freelance for independent consultant from Kemitraan Habitat for 1 years.
After several months we got the project to design an Apartment in Lenmarc, Surabaya. This project made Andi asked his former colleague, Asep Darmana or nicknamed Asep  and Raymond Halim to join his team. Previously, Asep was taken his undergraduate studies at ITB in 2005 and worked in DP Architects Singapore for 5 years  and owned his firm, Typical Studio. Meanwhile, Raymond was taken his diploma in RMIT Melbourne, B.arch in Deakin University Australia, M.Arch in Academy of Art University of San Fransisco, United States, worked as Junior Architect for DP Architects for 9 Months and worked freelance for CASA 32 townhouse and others. Few months later, we received new commision to design Blackbox Community Hub Bandung – a building which main function is cafe and using container for its main material. At the same time, we also decided to  ask our other colleague to join our team, Carol Dewitasari. Carol  taken her undegraduate studies in 2004 and continued her master in University of Applied Science, Stuttgart, Germany in 2014. She also had worked in DP Architects Singapore for 1 year as Junior Architect and presently working in  Richter Lighting GmbH Germany from 2014.
Started from  various individual with different background and bustle. Design Alliance Workshop or DAW was formed from the need to work independently (not in the scope of  domestic  or overseas corporate) and able to deliver a high quality of work with the International standars from experience working abroad in the global context. Begin with zero capital, DAW was formed by work on separate distribution of work load and communicate via online without direct communication. The biggest spend on beginning of firm was on buying the stamp that attached on letter of offering for ongoing projects. This zero capital finnally lead to result after worked separately for 5 months. From that time, DAW extend its foucs by open its studio in a rent house located in Cipete Area.
In the beginning of 2017 until now, DAW have been accepted 3 staffs graduate as best graduate from their university  in order to working on its project. In the later presentation will explained how DAW able to survive with zero capital from June to November 2016 and bravely open our office that successfully running for 1.5 years until present. We would also present on how some on going projects, challenges in facing various clients and other interesting story on running this young architecture firm.
About Patriot Negeri :

Patriot Negri or commonly called as Egi was born in Ujung Pandang on 18 September 1991 was the Co-Founder and Director of Design Alliance Workshop (DAW) Jakarta. He was taken his undergraduate studies in Institut Teknologi Bandung in 2009. His final project, designing Rasuna Said Office Tower that guided by Mr. Ridwan Kamil was stated as the best final project  during his graduation period. He also continue his master studies in ITB and graduate in 2016. His final thesis was titled : “Urban Climate Resiliences as an Approach to Design Flood Adaptive House (Amphibious House) “Case Study: Kampung Cieunteung RW 20, Baleendah”. The thesis focus on how a certain settlement able to survive on annual flooding by  making the house into amphibious house.


Before founded DAW with his senior, he had won several prizes in Architecture Competition either in National or International Competition. It was 1st prize for FuturArc Prize Student Competition on 2013, 1st prize in Sinarmas Young Architect Competition 2014 “Masterplan Category”, 2nd prize for International Workshop in Re-Designing Kurozaki, Japan, Merit Prize Futur Arc Prize Student Competition 2015, 2nd Prize on Visioning Jakarta 2045 and top 5 Finalist Surya University 2013. He also had been worked as Junior Architect in PT. Tsana Mulia, Bandung, PT. Atelier 6 Arsitek, Jakarta, and Department of Development in Institut Teknologi Bandung and Kemitraan Habitat. Some of the Architecture workshop already followed by him, either in national or International level. He also often invited as the speaker in BCI Asia & Futurarc Interchange Session, Bandung, Guest Speaker AUB 3 #58, Guest Speaker in Tourism Planning Forum “Tourism Design and Prototype Conference’, Jakarta, Guest Lecture in Lambung Mangkurat University, Banjarmasin and some opportunity of Guest Lecture in Architecture Department, Institut Teknologi Bandung.
Posted by Architects Under Big 3 at 3:48 PM