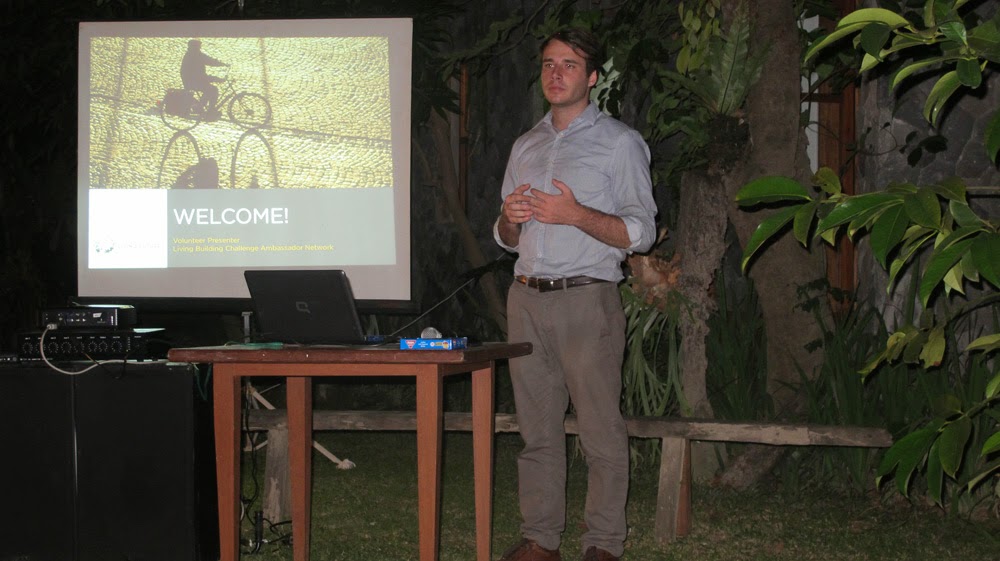 The discussion with Brandon that held at Popo Danes Architect’s Garden this night started with Brandon explanation about Living Building Challenge that start in 2006 with Living Future Institute. Brandon then Introduce himself as Bachelore landscape architecture degree from Oklahoma university USA. While he was studying, he found that he interested in sustainability & environmental studies, from there Brandon realize that he have to study architecture, in order to understand sustainable. As he was studying about sustainability Brandon tried to looked for another green rating system, so Brandon came across to Living Building Challenge

Brandon explained that Green Rating system is like a brand name, and Brandon compared with when we buy a brand like Coca Cola, we buy it because we know what in it, and we know what is gona be like. Brandon said it was same like Green Rating System, so that we know if a building had a Green Certified Building, it uses no electricity from the grind, it produce their own need for building, treats its own need, and doesn’t build on a rice field.

Brandon explain there are 20 imparative/ requirement for a building to be a Living Building, and the certificate has 3 base on actual result not a simulation or computer model, u have to show the energy bills and utility bills.

Brandon then explained that there are categories that important for a building to become a Living Building, there are

Site, Brandon explained it about reestablishing balance with nature, spesifically, define by the limits to grow, new project cannot be build on a green field,  rice field or jungle,  the site has to be documented before its developed. Before starting the construction, we has to go to the site and record what its look like, whats growing there, what are the conditions, and for landscape we have to use native or natural  plants that easy to grow on site.

Car free living, The project has to support the pedestrian, or community, especially in neighborhood
Water Category, Brandon explained that the building need to capture their own water, from rain, there are no water come from public utility, it have to has portable water that drinkable, the building have to capture and treat their own water without using a chemicals, and according to Brandon the common solution is catch the rain from the roof and filter it to become drinkable.

Energy, the building produce their own energy from renewable resources. Could be photovoltaic, solar panels, microhydro or geothermal.

Health, Brandon explained the team project has to making healthy building for people, so it need to have an access to fresh air, to day light, so to provide those, the building need to have windows that can open and close.

Biophilia, Brandon explained basically this was the Harvard biologist sid that people attracted to life and life is a processes, the more we understand the other species, the more we appreciate them and ourselves,  biophilia requirements we have to have these things in our design, such as natural lighting.

Materials, Brandon explained this is the most powerfull category, because if we know what’s in them (material), and where are they come from, we can easily take the decision wether is this material safe or not for our project, and also we need to know where they take and produce the material.

Embody carbonary footprint, to balance carbonary footprint, the project team has to buy the carbon credit or the renewable energy credit, basically to balance out and support the renewable energy
Responsible industry, Brandon explained that the project team has to try to start the adoption of 3td party standard, not from irresponsible mining, it has to be from the certified standard company, and also has to come from local sources, also all the waste has to be recycle, it canot be trash and end up in ocean or whatever, the waste can not be thrown away and has to be reuse, we have to make sure it make no waste after even if it beingbuild.

Equity, Brandon explained that the project’s team have to make sure that people included in the community, about community, regardless of disability or economic status. The project has to be design for people not for car. The design has to be for community.

Democracy & social justice, everyone must include in the community they cant be blocked off from design.

Beauty 6 th category, Brandon explained that this is the point that other rating missed, Brandon said that beauty is the requirement for people to care enough to preserve and to continue on, every project has to have features for celebration to a cultures, place, the project team has to really know the culture of the area, so that they can design a beautifull place.

After the building finished and follow all the points, it has to be open in a public and giving a words on how it works, how they’re actually using all their energy, collecting all their water, so that they can learn that this is possible and can be done.

First question came from Jhe (Architect from Habitat 5), Jhe asked about the connection between Living Fture Institute with the Government, either you help them to make the regulation or else?, Brandon explain that this is just a tool kit, like a check list for what someone have to do to have a Living Building. The relationship with the Government could be as citizen as people if they don’t agree with the law and policy, so they will write a letters to the representative, and the will write to the organizations and they gonna say that we know that this is toxic and we’re not gonna buy it, so the relationship is really democratic.

Brandon also explained the coonection Living Building Challenge with other Architectural organization, they just organize it, wrote it, issue the challenge, and then the project team will come with their to tell how hard the challenge and keep improvising.

Second question came from Nano, Is it impossible to apply it to all over the world, because they have a different product.
Bandon explained that the materials is the hardest right now, because everybody don’t know the ingredients, u have to speak up tell them whats not good, better than doing nothings

The Third question also came from Nano, Nano asked What is the real challenge, what is the main things that will be our problem, why only a few building can do with the Living Building Challenge.
Brandon explained that the challenge is that its very hard to apply, net zero water and energy very hard to do, every drop of water that touches your site, has to be use for the building maintenance, after it being used 2 or 3 times, you have to make sure that it save to go to the river and not make people sick. And that’s very hard to do, and about the cost, it depend on the building type, the climate and the location,

The last question came from Nano, Nano as whether it can be cheaper, why its only become a challenge not become a trend, Brandon explained that part of the risk is you’ll spend a year working on this and it failed when u build it, find out the first time u try it it didn’t work, or if its work for the first time, you have to continue testing every month, for example, the testing for 8 months works great and then the 9th month it failed because the electricity’s not enough to supply the building.

Brandon close the disussion with his statement about his excitement to have an opportunity to share about the Living Building Challenge in AUB3, and he had a great time doing his internship in Bali in Popo Danes Architect. 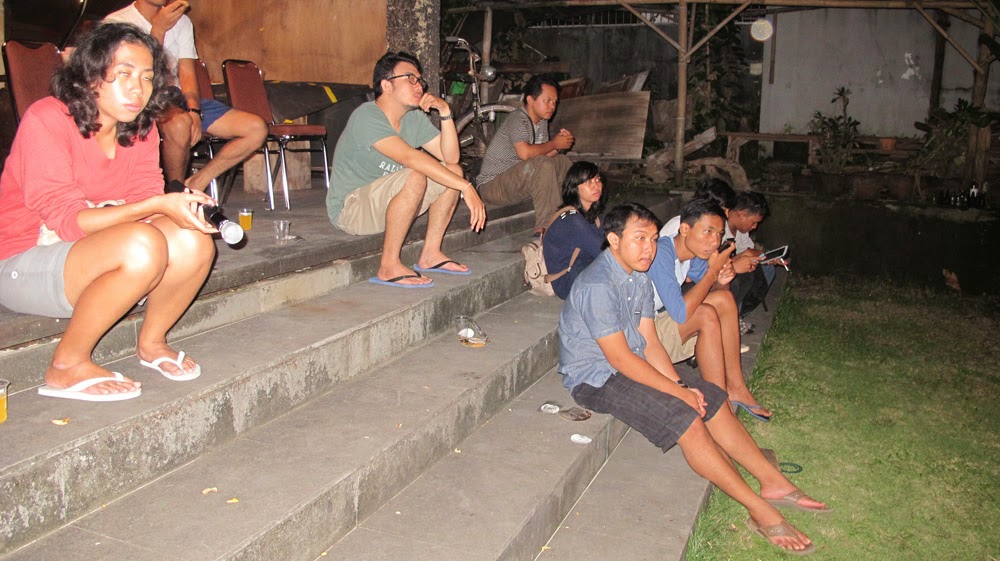